Boerboels and the Rhino Revolution

South Africa has a terrible incidence of rhino poaching. There are sites with statistics but I find them too depressing reading. Up to 9 rhinos a day are killed for their horn, which is then sold on the black market in Asia for more money than gold. It is (falsely) believed to cure cancer, beat impotence and all kinds of ailments plus bring luck. One rhino horn can sell for a quarter of a million US dollars in Vietnam.

The numbers of rhino being killed is rising substantially each year and for the first time last year I actually began to think the only way out of this awful situation would be to legalise the trade in rhino horn. It would cause the price to drop, making it less attractive to criminal syndicates. Harvesting the horn would also be able to be done more humanely as rhino horn is made up of keratin (like hair) and it can be simply shaved off in small amounts without harming the animal. The horn itself is made up of thousands of compacted strands of hair.

Another second option would be to surgically remove the horns from calves as soon as they start to grow, making them less attractive to poachers. However, this does result in some ‘revenge attacks’ with poachers killing them anyway. It also makes the rhino vulnerable in the wild.

A third option is to bring the attention of the world to this tragedy and put pressure on the EU and other such economic unions trading with Vietnam and other countries who believe in the power of rhino horn to put in place stricter trade rules.

What goes without saying is that there should be longer prison sentences for poachers, because now they are out on bail and back poaching before nightfall. Of course they usually work for syndicates who are professional criminals and are hardly ever prosecuted.

In the area of South Africa I come from, there are many many game farms and safari lodges. We are in a-malaria free area and can offer the big five (lion, elephant, leopard, rhino, Cape buffalo) and even the big seven (the big five plus the Southern Right Whale and the Great White Shark). The incidents of rhino poaching in this area affect rhino we know and love.

Boerboels are now being brought in as a protection measure against poaching.

24/7 dog security patrols are being introduced at Rhino Revolution – these are the measures we now have to take to protect Africa’s rhino. Today the team were given a demonstration of how formidable these dogs are, and their tracking skills following a human scent trail (I should point out the “poacher” in these pics was a volunteer, and very well padded!).

As you can see, these dogs are beautiful, working Boerboels. All photographs by Virginia Quinn. See the original post on the Rhino Revolution Page 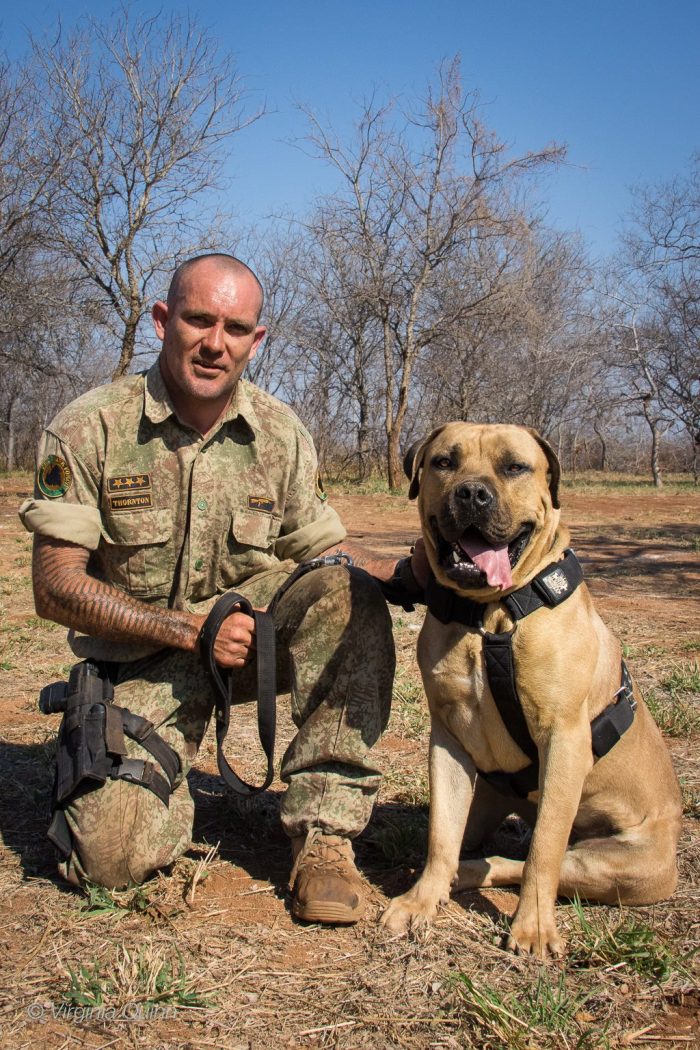