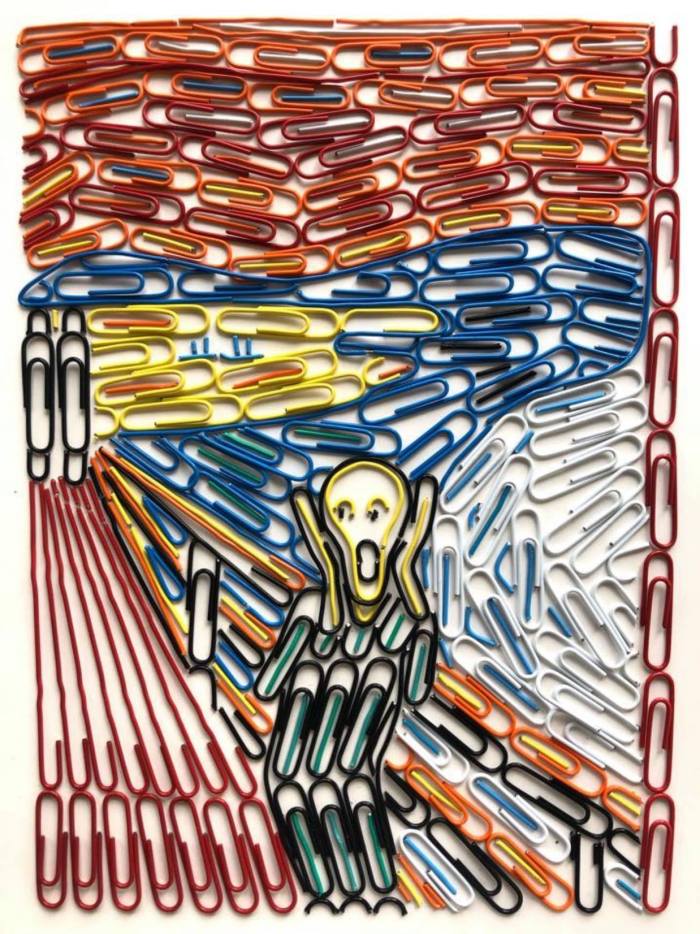 Behold the paperclip: one of humanity’s humblest yet most utilitarian technologies.

Nothing but a length of galvanised steel wire, strong enough to hold its grip on a hefty sheaf of papers, pliable enough to be restored to its primal form and deployed on other missions. SIM-tray ejector; router-rebooter; salt-cellar unclogger; emergency zip-fastener; nail-cleaner; and of course – don’t try this at somebody else’s home, please – lock-picker.

But beyond its infinite utility, the paperclip can also be called into action as a medium of artistic expression, as demonstrated in this fine work by the American multimedia artist, Adam Hillman.
Somehow, the use of paperclips, a staple symbol of corporate and government bureaucracy, adds an extra dimension of existential anxiety to this version of Edvard Munch’s The Scream, or Skrik, to give the painting its original Norwegian title.

It may just be a happy coincidence, but it’s worth mentioning that the little-sung inventor of the paperclip, back in 1899, was also a Norwegian.

Johan Vaaler was a scientist and mathematician who was working at a local invention office when he came up with his design.

The patent reads, in part: “A piece of wire that is bent to a rectangular, triangular, or otherwise shaped hoop, the end parts of which form members or tongues lying side by side in contrary directions.”
The paperclip is so much a symbol of Norwegian national pride, that there is a giant statue of one on the campus of a business school in Oslo.

And during the Second World War, when the country was occupied by the Nazis, many Norwegians took to wearing paperclips as badges of resistance, silent reminders that the people were “bound together” against their occupiers.

Everything, if you look at it in the right way, is art, and everything is expression; even the most seemingly mundane object of office stationery, in the right hands, holds the power to move. (by Gus Silber)